Can Science Fiction Save the Earth?

In the 1957 pulp classic On the Beach, the novelist and aeronautical engineer Nevil Shute imagined a horrific scenario in the aftermath of World War III. A small group of survivors clustered in southern Australia await the arrival of a deadly radioactive cloud, contemplating the near-certainty that the rest of humanity has already perished.

It’s a terrifying prospect, of course, which is why the book has retained its grip on the public imagination, adapted twice as a movie and, in 2008, as a BBC radio broadcast. Dan Bloom first read On the Beach in a high school English class in 1967. It gave him Cold War nightmares.

Bloom was panicked all over again a decade ago when he read the doomsday predictions of the British environmentalist James Lovelock. Writing in the Independent, Lovelock envisioned an earthly population wildly diminished by massive climate change—not hundreds of years in the future, but by the end of this century.

“I was in a deep funk for about a month,” says Bloom, a former news reporter who has been teaching English in Taiwan for 20 years. Lovelock, the scientist, has since boomeranged, accusing himself of “alarmism” and emboldening gleeful climate skeptics. Bloom, meanwhile, has tempered his own pessimism: he thinks we’ve got 500 years, “30 generations of people, to keep working on this problem.”

While he’s still here on the potentially dying planet (Bloom is 70), he’s looking to literature to help convince his fellow human beings about the ominous implications of carbon emissions.

A native of Springfield, Massachusetts, Bloom says he became an environmentalist while studying at Tufts University in the late 1960s. He read Ecotopia, Ernest Callenbach’s cult novel about an attempt to create a green utopia on the West Coast, when it came out in 1975. In 1980, he tried to find an agent for a novel he wanted to write about a huge flood that submerges New York City. What did he learn from that experience?

It wasn’t until he saw the 2004 disaster film The Day After Tomorrow, which imagined the sudden arrival of a new Ice Age, that Bloom started thinking about the power of storytelling to rally like-minded citizens concerned for the future of life on Earth. A few years later, he coined a phrase: “cli-fi,” or climate fiction.

He’s committed to promoting the idea that well-told stories are and will be critical to raise awareness about the implications of climate change. Unpaid and unaffiliated, Bloom has devoted the last several years to contacting writers, editors and literary gatekeepers, hoping to draw attention to his notion of cli-fi.

His idea of a genre for speculative climate fiction found some traction a few years ago when it was endorsed on Twitter by Margaret Atwood, the novelist whose science fiction trilogy, capped by MaddAddam (2013), dealt with a corrupt anti-environmentalist. Bloom acknowledges and applauds the broader genre of eco-fiction, popularized during the rise of the environmental movement in the 1970s and epitomized by such titles as Edward Abbey’s The Monkey Wrench Gang and, more recently, Barbara Kingsolver’s Flight Behavior.

But he’d like to think of cli-fi as “an independent, stand-alone genre,” restricted to those works of fiction that consider the specific problem of human-made global warming.

That makes for a limited category. Yet there are examples as far back as Jules Verne, who imagined—in the 1860s—a future Paris struggling with a precipitous drop in temperature. That was a plot point in Verne’s “lost” novel Paris in the Twentieth Century, which went unpublished until 1994.

Given the speed with which the phrase “climate change” (which actually dates back at least 50 years) has overtaken the environmental discussion in recent years, it’s perhaps not surprising that there’s been a surge in books that could be called cli-fi. Among them are Marcel Theroux’s Far North (2009), which the Washington Post called “the first great cautionary fable of climate change”; Ian McEwan’s Solar (2010), which won a UK literary award for comic fiction; and Nathaniel Rich’s Odds Against Tomorrow (2014), which imagines New York City flooded by a colossal hurricane.

These are all examples of quality fiction that happen to take climate change as a shared theme. “As far as I’m concerned,” Bloom says, “cli-fi needs character-driven stories. It shouldn’t be propaganda novels.”

A good story, he believes, will have the potential to attract not only climate activists, but also some of the deniers: “The whole point is to reach people with emotions, not just preach to the choir.”

Next up, he thinks, is the forthcoming novel from the Hugo Award-winning science fiction veteran Kim Stanley Robinson. Due in March, New York 2140 submerges the great city under the water of the rising tides. “Every street became a canal,” explains the promotional blurb. “Every skyscraper an island.” How will the city’s residents—the lower and upper classes, quite literally—cope?

The book, Bloom thinks, might be the next phenomenon in the genre he created.

“I think it’s going to blow the lid off.”

James Sullivan is the author of books on George Carlin, James Brown and the history of blue jeans, a regular contributor to the Boston Globe and former staff critic for the San Francisco Chronicle. Follow him on Twitter @sullivanjames.
http://www.jamessullivanauthor.com 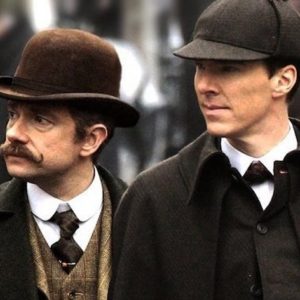 The matter is a perfectly trivial one, but there are points in connection with it which are not entirely devoid of interest...
© LitHub
Back to top